The Art of Learning

The Problem with Free Speech

A Lucilius Parable: Waiting for Now

A Metaphor of Psychological Experience

This episode is dedicated to Sam McRoberts.  You can connect with Sam on Twitter at @Sam_Antics

This episode begins with a description of pyramids that at first may seem off topic and perhaps even convoluted.  There are a couple rudimentary drawings accompanying this episode on tinkeredthinking.com that might help if the physical descriptions begin to feel as though they are describing la-la land.  Do remember though, this is ultimately about the long-term effects of consistent meditation.  If a few minutes of description feels a bit much, then perhaps the episode might be best taken to heart.

There are two ways to build a pyramid.

To be clear, let’s put aside the veritable monument of human argument about what might have happened in Egypt a few thousand years ago.

Rather let’s examine the feat in a far more simplistic way, the way a child might when a toybox full of blocks is at hand.

One way is to plan out the whole thing.  Determine the height you want and from that determine how wide the base needs to be and then start from the bottom by laying a huge flat base and then slowly working up one level at a time until the entire thing is finished.

The other way is to realize that a pyramid is somewhat fractal in nature regarding the way you can build it.  Without diving too deeply into a strict definition of fractals, we can look at a large pyramid and see that there are potentially many much smaller pyramids inside of it.  We can even see this as a concentric phenomenon, like an onion.  Peel back a layer of an onion and it still looks like an onion.

The second way to build a pyramid is to build the smallest most basic pyramid.  A child with some blocks would use maybe 5 to accomplish this.  4 placed in a square as the base and a second level consisting of just one placed on top in the center of this 2 X 2 square. 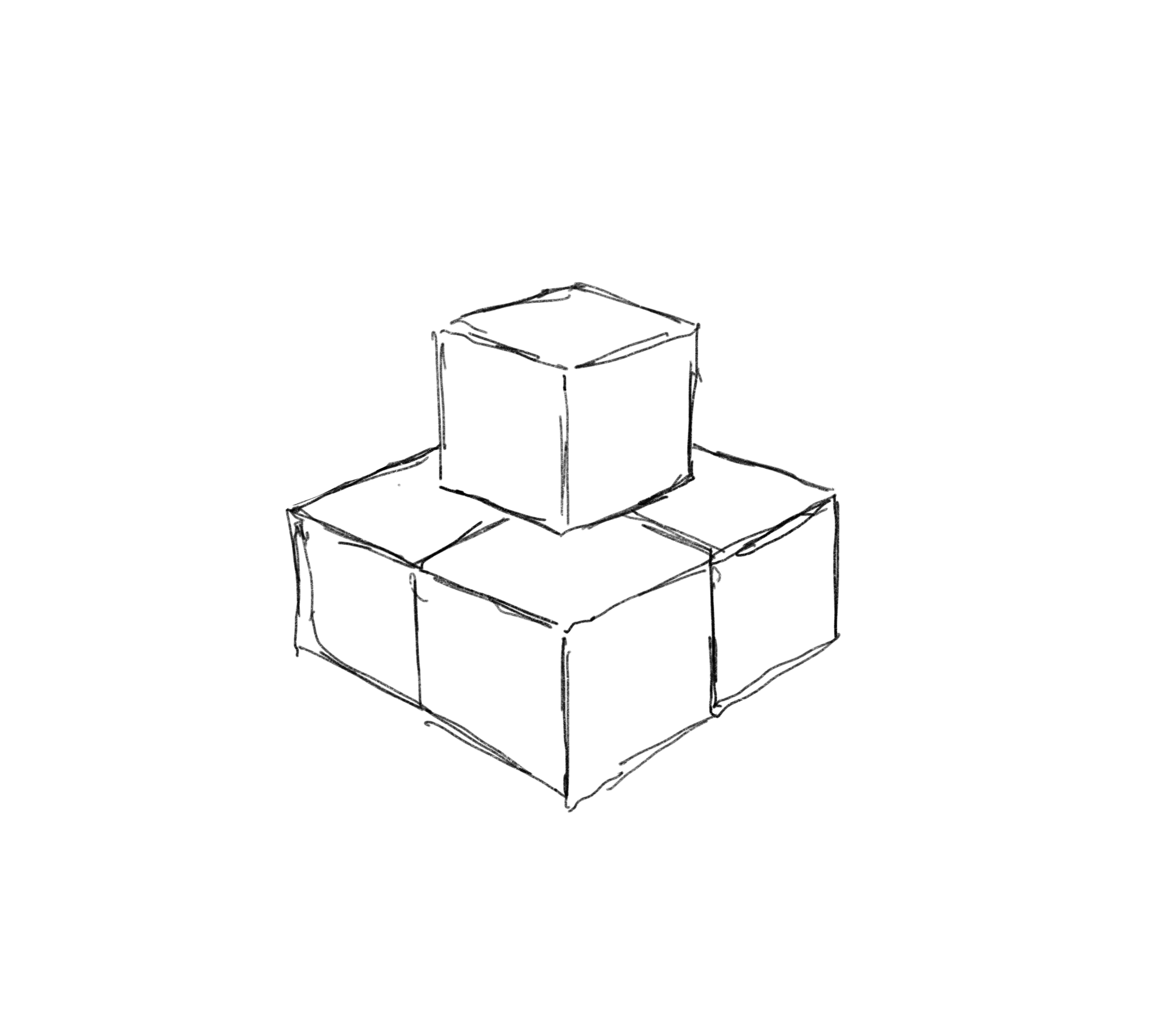 We might term this the minimum viable success when it comes to building pyramids.

What’s interesting about this, and how it relates to something like meditation is how the size of the jump changes when we go to the next complete pyramid that we can build on top of this first basic one.

If a child were to add to this tiny pyramid in order to make it bigger, the jump is far bigger than we might at first think.  First the child would add a row of blocks around the base, creating a new perimeter, which would be an additional 12 blocks.  And then blocks would need to be added to the next layer which currently only has 1.  This would be an additional 8 blocks.  This creates a foundation that can then support an additional layer of 4 on top of it and then a final pinnacle once again of one block to make it a complete pyramid. 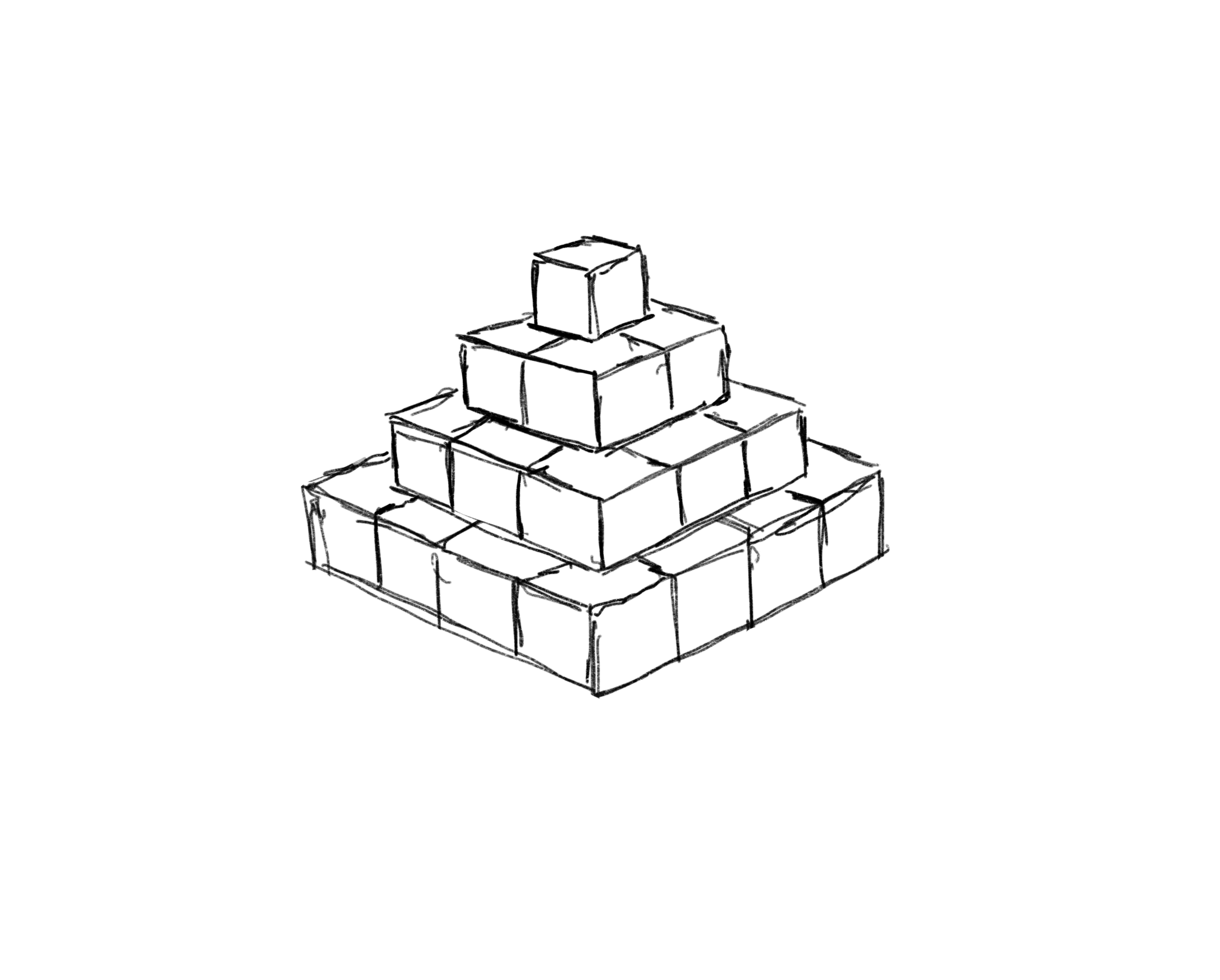 Think of this for a moment.  The most basic pyramid is 5 blocks.  4 on the first layer and 1 block on the top.  The next legitimate pyramid we can build on top of this basic structure is a pyramid that is suddenly double the height, 4 layers tall and it requires and additional 37 blocks on top of the original 5 for a total of 42 blocks.  This is a massive jump.

If we were to go through this process again, the pyramid would rise two levels but this would require 51 additional blocks! more than doubling the total amount to 93. 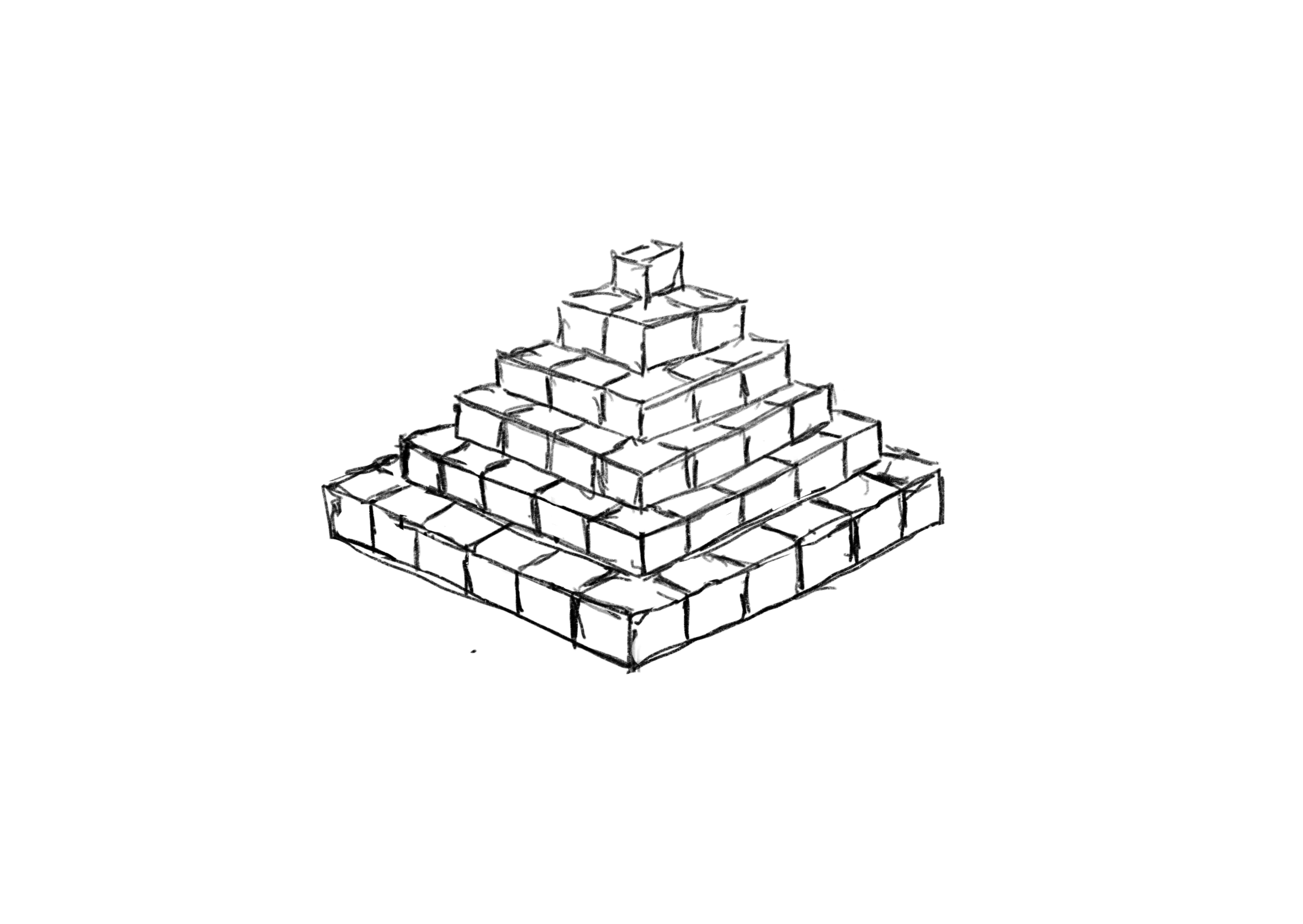 We could have started with a base level of 36 and then added a second layer of 25, but if we think of each block as a unit of time, then putting these all into place means it’s going to be a long time until we see something that looks like a complete pyramid.  Whereas by making the smallest pyramid possible first, it only takes 5 blocks and we see a pyramid very quickly.

As with the practice of any skill where we can become better, its possible to recognize a similar trend with the results that we get based on the time and energy we put in.  The first ten hours of practice can get you something like that first basic pyramid in terms of ability.  And then practice can often feel like it’s plateaued.  As though no real improvement is happening, and then all of sudden it feels like a breakthrough has occurred and our ability has matured.  It’s as though our constant pyramid building has suddenly resulted momentarily in the shape of a bigger complete pyramid.  But we continue to practice and more time and effort passes before we see the same thing happen again on a new scale.

With meditation, particularly with mindfulness practices, it’s generally accepted that 3 to 4 months are required before results start to show up.  Many certainly report a honeymoon period during the first few weeks, though it’s quite possible this is more excitement about embarking on a new endeavor than it is any real tangible result from meditation.  FMRI scans also seem to indicate some truth regarding this 3 month trend.  Changes in brain structure remain unnoticeable until at least 3 months of daily continuous practice.  We might think of this milestone in a practice of meditation as that first basic pyramid.

Let the imagination follow this analogy further and we might wonder what that second pyramid would look like in terms of “results” regarding meditation.  As we saw with our child building the pyramid, it’s quite a jump between that first one and the second, and this might make the analogy quite apt for meditation.

Well regarded figures in the field of meditation like Sam Harris and Joseph Goldstein, have reported that things like anxiety and depression decrease significantly over time, or that one’s relationship to these emotional experiences changes so drastically that any practical description might as well report their disappearance.

While this result is anecdotal, and doesn’t seem to have any hard science to back it up, it does seem to be widespread and nearly uniform among those who maintain a practice for many years.  This writer, for one, can add to such anecdotal evidence by saying that something fundamental regarding negative emotions starts to undergo a profound shift after a period of 2 or 3 years of consistent daily practice.

After enough practice and time, something like ambient anxiety, or the likelihood of anxiety to suddenly spike simply begins to fade and eventually they dissolve entirely.  The emotions that do crop up seem as though they have higher resolution, with more specificity, and something like anxiety in retrospect takes the character of an unresolved cloud that had more to do with a confusion as to what was really occurring rather than a genuine reaction to our experience of reality.

Meditation, in this sense, really is an example of results that only come with consistency and patience.  Just as the scenic route is fundamentally at odds with the concept of the shortcut, we have to put in the time to reap the benefits here.

Pushing beyond these practical benefits allows the mind to enter an entirely new definition of progress.  As opposed to the anticipation that comes with the pleasure of seeing a full pyramid finally materialize again after so long, progress begins to take on a fractal nature.  With enough of a pyramid built, the placement of each block looks as though it completes an entirely new small pyramid embedded in the larger one. 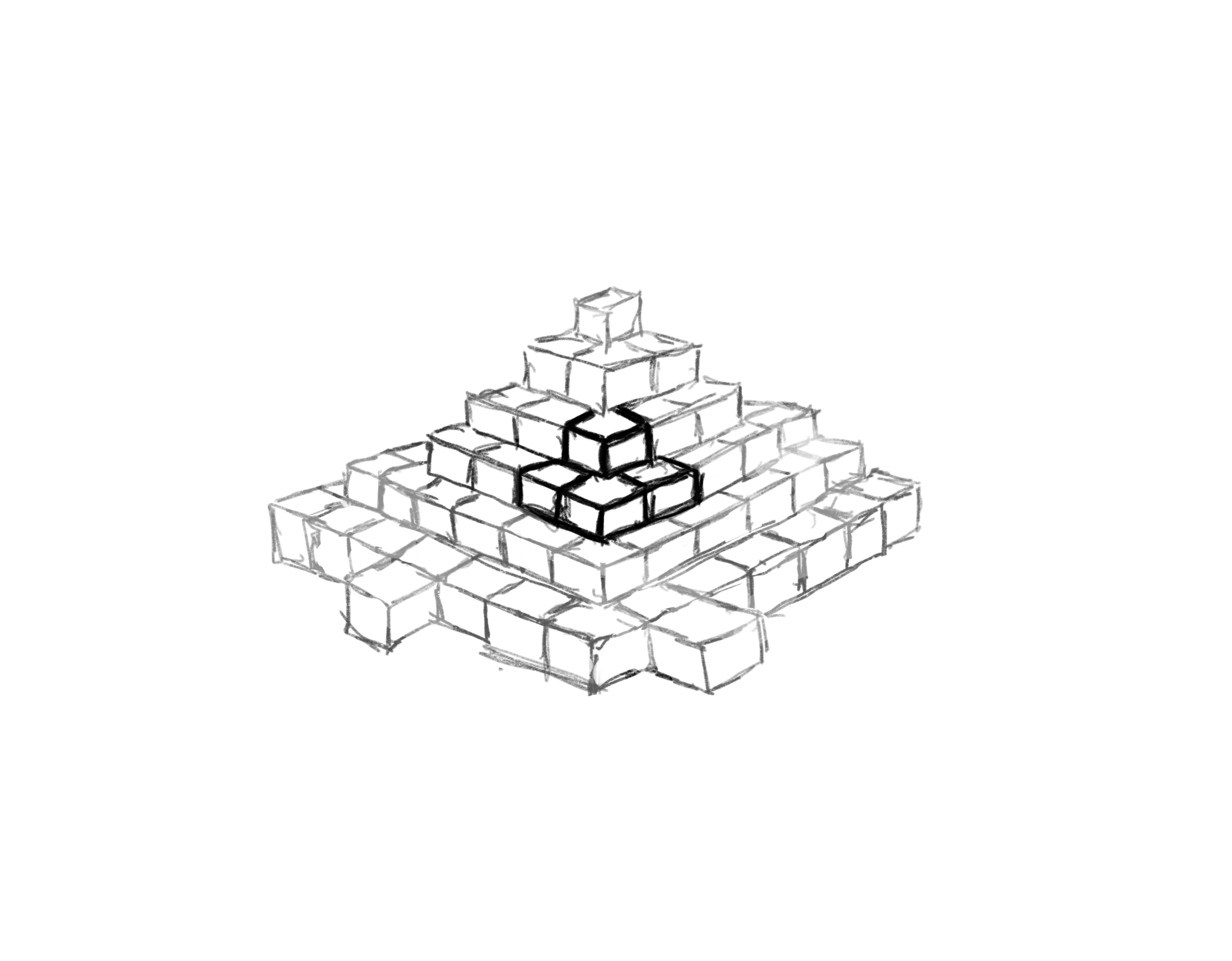 Tangible goals like those initial markers of progress like increasing focus and attention or decreasing anxiety and panic attacks - these dissolve as the moment gains a higher and higher resolution.